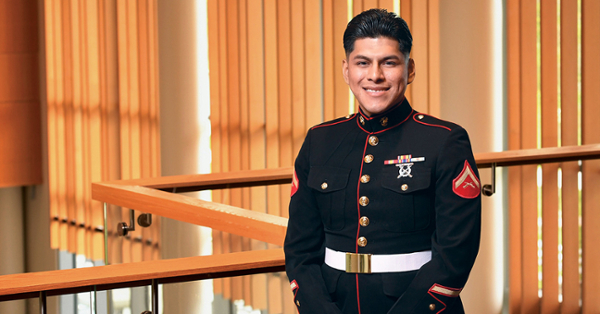 Julian Doroteo found out early on that he wanted to be a barber.

But more than having his own chair, the Bridgeton resident wants his own showcase. And then a chain of showcases. And a school to train others so that they too will one day have their own shop window.

In pursuit of that dream, the first-generation college student and licensed cosmetologist transferred to Rohrer College of Business (RCB) to pursue a Bachelor of Science in Entrepreneurship. Already a Marine Corps reservist, he plans to open his first hair salon on Rowan Boulevard this fall.

Although his initial passion for haircuts launched him on his current path, the 24-year-old has found real grounding, as well as inspiration, mentorship and role models, through the program. RCB entrepreneurship.

“Professors Eric Liguori and Greg Payton have been great mentors,” Doroteo said. “Studying with them made me realize that all successful people start at the bottom and work their way up.”

“As Professor Payton said, fail young and fail often. But every time you do it, get back up a little stronger,” he said.

Doroteo joined the military in part to continue a tradition of military service started by his father, who served in the Mexican military.

In addition to her career aspirations, Doroteo plans to apply to Air Force Officer Training School after it begins this week.

He has already proven his determination to simultaneously pursue his military service and his entrepreneurial goals. Last fall, he participated in RCB’s Idea Challenge, a program that provides seed funding for promising student business ideas.

Although his team’s idea for a phone app called SHEARS made it to the final, it didn’t rank high enough to win seed funding.

Still, just pitching the idea for the app, which would make the booking process easier for hair salons, was a learning experience, Doroteo said. The infantryman was scheduled to practice on the weekend of the Idea Challenge finals, so he did what any enterprising Marine would do. He got permission, then video called from a latrine in Fort Dix.

“The only place I would have peace and quiet where you couldn’t hear the gunshots was in the bathroom,” Doroteo said. “There was a group discussion while we were doing the presentation and someone said, ‘Is that a gun? but of course it was. You have to wear it, always.

Hands of an artist with a head for business

Doroteo, who is serving a six-year enlistment in the Marine Corps Reserve, said the dual career path of military service and hairdressing speaks to his patriotic and creative sides and that he is on track to develop his business.

Enrolled at Rowan while a part-time barber, he started cutting hair for friends on campus, then for friends of friends, and quickly developed a clientele.

“I probably have over 50 clients just at Rowan’s and about 90 more at my place,” Doroteo said.

After emigrating to the United States, her father wanted to start his own business, but with limited English and no financial support, it proved difficult.

Inspired by her parents’ strong work ethic, Doroteo knew that hard work alone was not enough. This led him to prepare for his entrepreneurship degree.

“I came to school to learn the terminology, the language, the rules of opening a business,” Doroteo said.

Armed with his degree, a foundation of knowledge about starting a business, and the connections he made at Rowan, Doroteo considers a government-backed small business loan to launch his first shop. And with his girlfriend, who is also a licensed cosmetologist, three experienced hairstylist friends, and an established clientele on campus, Doroteo is eager to do just that.

“What sets me apart is my scissor work and, of course, my passion for business,” he said.

Payton, who co-directs the Rowan Center for Responsible Leadership, served 27 years in the military and had a career in banking before coming to Rowan. The RCB faculty member couldn’t help but be impressed with Doroteo.

“Julian has a ‘never quit’ mindset that is essential for any entrepreneur,” Payton said. “I was honored to have Julian as a student in my Small Business Management class and very impressed with his desire to give back to the University and help others in the community.”

Rowan University supports the United States military and its veterans. However, it is not officially bound or endorsed by the US Department of Defense or any of its branches.