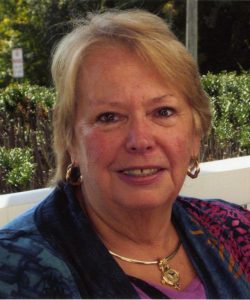 Joyce was born November 1, 1944 in Martha’s Vineyard and lived in Edgartown. She was the daughter of Eldon K. Willoughby and Marion L. (Millen) Willoughby, and the former wife of Edward DelTorto.

She grew up in Tewksbury and graduated from Tewksbury High School. She graduated from hairdressing school and returned to Martha’s Vineyard with her four children in 1976. She raised her children on a small farm in Tisbury, where her house was always open to anyone in need of a meal. or accommodation. Even though she was working full time and raising her children, she still had time to help with fundraisers, community events and island initiatives for those in need.

She owned the Shear Elegance hair salon for 20 years. When she retired from hairdressing, she became an assistant chef at Edgartown School, where her dazzling smile, humor and love for children were contagious to everyone around her. She always had a hug and a great meal for everyone.

Joyce loved being with her family and friends and shared many special moments with her best friend of 60 years, Claire Penny. When she was younger, she was found every day on the Edgartown side of State Beach during the summer. Cooking was a passion for Joyce, and Italian and Asian cuisine was definitely her specialty. She also loved watching the Red Sox and the Patriots, especially with her beloved dog, Brady, on her lap.

After her retirement, she moved to Sebastian, Florida, near her sister Linda and brother-in-law John, where she spent her winters, returning home for summers on the vineyard. She loved to sit by the water, people watch and read.

Joyce was a loving mother and grandmother and she will be dearly missed. She is survived by her son, Dominic DelTorto, and his wife Laurie of Bethlehem, Connecticut; her daughter, Gina DeBettencourt, and her husband Alan of Oak Bluffs; his daughters, Dianna DelTorto and Angela DelTorto, both of Edgartown; her eight grandchildren, AJ, Tony, Zachary, Devin, Gino, Tyler, Anthony and Kendra, who were fortunate enough to have such a presence in their lives; by his brother, Eldon (“Rick”) Willoughby, and his wife Marge of Edgartown; her sister, Linda Arsenault, and her husband, John (deceased) de Sebastian; and her sister, Dianne Witt, and her husband Lee (deceased) of Chelmsford; and by several nieces, nephews, cousins ​​and extended family members. Joyce was predeceased by her mother and father, her former husband, Edward DelTorto, and her brothers-in-law.

Memorial visitation will be held on Saturday, October 16 from 10 a.m. to 11 a.m. at Chapman Funerals and Cremations, Edgartown Road, Oak Bluffs, with a funeral service at 11 a.m. and interment to follow at New Westside Cemetery in Edgartown.

Donations in her memory can be made to the Island Housing Trust, PO Box 779, West Tisbury, MA 02575, or online at ihtmv.org/donate.