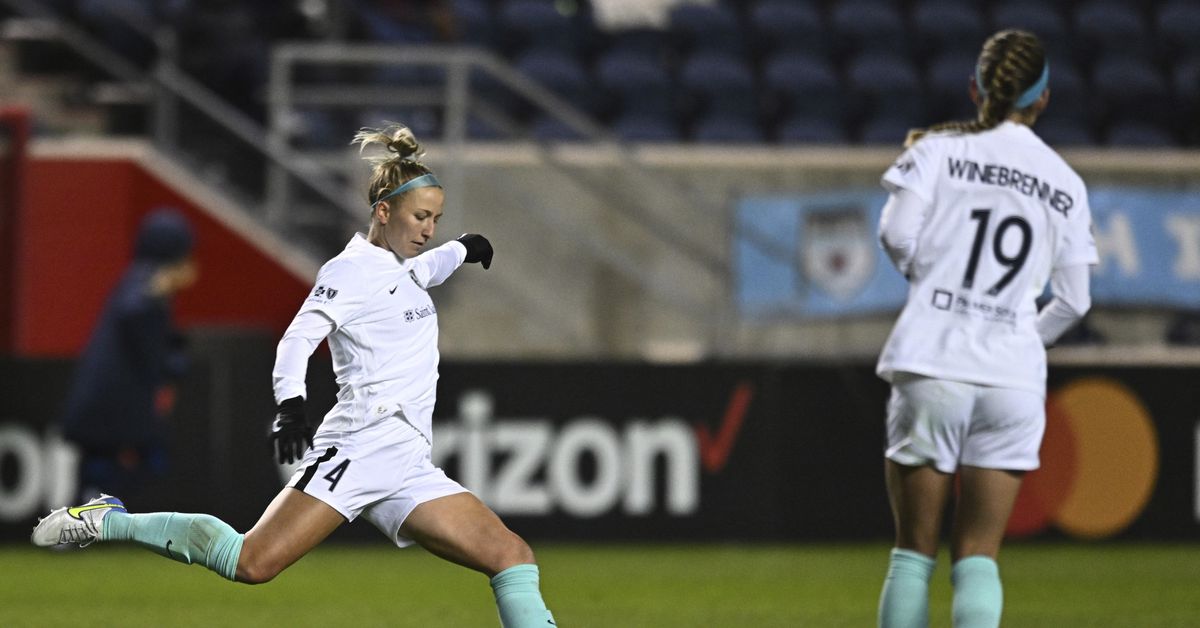 Kansas City Current played their first home game of the 2022 NWSL Challenge Cup. To say things didn’t go to plan would be an understatement. The team lost 0-3 against Racing Louisville, who had not won a match in this tournament so far. Despite the result, there are reasons for optimism. So let’s move on to some observations from the press gallery on Saturday.

Instead, it was clear to me (and supported by The Blue Testament member of the Chzbro community in the thread of the match), they were in a 4-2-3-1. The defense in the image above is correct: AD Franch in goal, Hailie Mace at LB, Alex Loera at LCB, Jenna Winebrenner at RCB and Kristen Edmonds at RB. Desiree Scott was in midfield, but was flanked by Chardonnay Curran in a double pivot.

Now the training was smooth. Hamilton would come up front at times (and the team looked better when they were there because McCain is a midfielder, not a forward – although she might be able to play second striker). The three forward midfielders circled around a group, with that group perhaps at its best with Pickett at 10.

The problem is that there are many of these girls who want to play in the center, so the formation did not correspond to the players.

Pickett had missed an action due to a concussion, so I was a little surprised to see it start straight after injury. I thought Matt Potter played her out of position by making her a wide midfielder. It struck me as “she’s so good you can’t take her off the pitch”, even though that’s exactly what he did at half time.

Victoria didn’t have her best game, but I’d say it was pre-season, her first injury-free game and what she was asked to do. Constantly, Edmonds was playing balls overhand into space in front of Pickett and she just couldn’t get there. It’s not her game. She’s so skilled with the ball even in tight spaces and seems to be her best dribbler against defenders. If you force this formation, I’d probably play it at 10, but Lo’s best place is also in midfield, so again the formation didn’t fit the staff.

The only thing this formation lacked was pace and width with the starters. Hamilton caught me winning a few balls over the top, so I think she’s faster than I thought. But the two quickest starters were Mace and Edmonds in my opinion. They created most of the width (although Curran did a good job at times of going wide in attack to fill the gap when the other midfield was too tight).

Both Edmonds and Mace could probably play higher up the field and be effective. Especially Mace. She would have been perfect for one of those wide midfield roles with the likes of Izzy Rodriguez and Mallory Weber able to fill in at the back. Again, it just hit me trying to play your best players, even if the formation wasn’t right.

One thing to watch is how Kansas City is getting used to its new ground. It’s so much larger than Legend’s Field and they’ll learn to take advantage of it.

Adrianna Franch returned to the starting lineup after resting midweek. She didn’t play her best game. She probably could have done better on the third goal. I’m going to give an assist on the second one because it was weird and even a bit on the first one since it’s an own goal and a bit of bad luck.

However, she struggled a little with her feet at times, especially in the second half when she literally dribbled past herself into trouble and lost the ball in her own box (how it didn’t end like a goal is a miracle). After Cassie Miller played well midweek (she wasn’t tested as much to be fair), there’s definitely some competition for the starting goaltender position.

Live, the assistant referee signals that Louisville is offside. However, the referee lets the game continue and Lauren Milliet hits him. The referee appears to have determined that because Loera tried to play the ball, it nullifies Louisville’s offside. However, she probably stretches to play it because she knows the player is behind her and is being punished for jumping her.

I think that’s technically the rule, but it feels like the wrong call. I know my colleague Thad Bell was the pool reporter at the game and asked the referee, but by the time I left there was no response.

Kansas City was the better team

Go watch the highlights below and you’ll see KC was all over Louisville. They totally dominated the first half. They were unlucky on their own goal and then the second goal was very weird before the team closed down a bit on the third. The right bounces can not go like this all season.

Just before stoppage time, Kansas City may have received a bad blow. Hailie Mace had moved into one of the wide midfield roles with Rodriguez filling in at the back. She was heading to the left sideline and crossed a ball where she was absolutely cleared by the defender. There was nothing in the highlights and no replays were shown in the stadium, but it didn’t look great. She appeared to be trying not to gain weight as she was being helped and the current played stoppage time against a woman because they were out of subs. After the game, Matt Potter didn’t have an update yet.

In the first four games of the Challenge Cup, Mace was the MVP in my eyes. It’s weird to say from a fullback, but she was so good. The USWNT is still looking for good full-backs and Mace is advocating for a return to the national team.

In this game she sometimes looked a bit tired on her own goal, I think if she just jostles a stronger hair to get into position, it’s a blocked cross instead of a deflection into her net , but she’s just on the wrong side of McDonald’s.

Still, this team can’t afford to lose another offensive talent after losing Lynn Williams for the season. Here’s to hoping it’s nothing serious for Hailie.

Here are highlights of the match put together by Attacking Third, a CBS Sports podcast. I recommend that you subscribe to them because they offer longer and well-made packages than the NWSL.

Bonus – Check out this Tifo

Please disregard my typo in the Tweet (I should stick to a keyboard rather than a phone because of my big fingertips). Congratulations to the Blue Crew! They were quite loud too, given that just over 6,000 were in the stadium.